The Aizoaceae Martynov, nom. cons. (fig-marigold family) is a large family of dicotyledonous flowering plants containing 135 genera and about 1800 species. They are commonly known as ice plants or carpet weeds. They are often called vygies in South Africa and New Zealand. Highly succulent species that resemble stones are sometimes called mesembs.

The family Aizoaceae is widely recognised by taxonomists. It once went by the botanical name 'Ficoidaceae', now disallowed. The APG II system of 2003 (unchanged ... 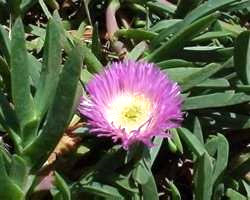